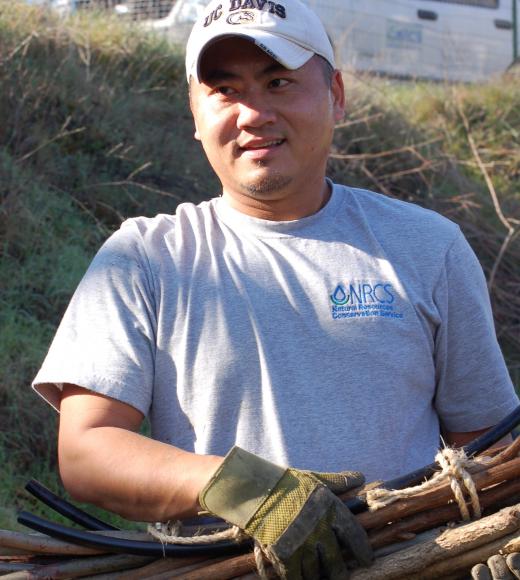 “I knew I wanted to be an agricultural engineer after taking a tractor driving class at UC Davis and it initiated my career path.”

Ha received a B.S. degree in Biological Systems Engineering (Agricultural Engineering) at UC Davis in 1998.  During his study at UC Davis, he joined the Biological & Agricultural Engineering Student Club and participated in the first annual ASAE Quarter Scale Tractor (QST) Design Competition and Pull.  Upon graduation, he landed his first career job as a Product Engineer for Kubota Tractor Corporation in Torrance, CA where he utilized his degree to provide technical support for Kubota’s construction equipment.  Ha left Kubota after a few years and moved back to his hometown, Sacramento, where he has been a longtime resident.  Thanks to a UC Davis classmate and friend, Ha was offered a Field Office Engineer position in Woodland, CA with the USDA Natural Resources Conservation Service (NRCS) in 2001.  With NRCS, he has worked on many projects, partnering with private landowners to implement NRCS conservation practices.  The projects include improving irrigation systems on cropland, developing livestock watering system on rangelands, controlling soil erosion, and improving wildlife habitat in Yolo County.  He later assisted multiple NRCS field offices and was the Acting Team Engineer for the Sacramento Valley Cluster before joining the NRCS State Office Engineering Section at the Davis office in 2018 as their Agricultural Engineer.

Ha tries to incorporate NRCS conservation practices at home wherever he can.  He has converted his front yard into a drought-tolerant native garden (similar to a site at UC Davis Arboretum Public Garden) to minimize water usage and to promote beneficial insects and pollinators in his neighborhood and community.