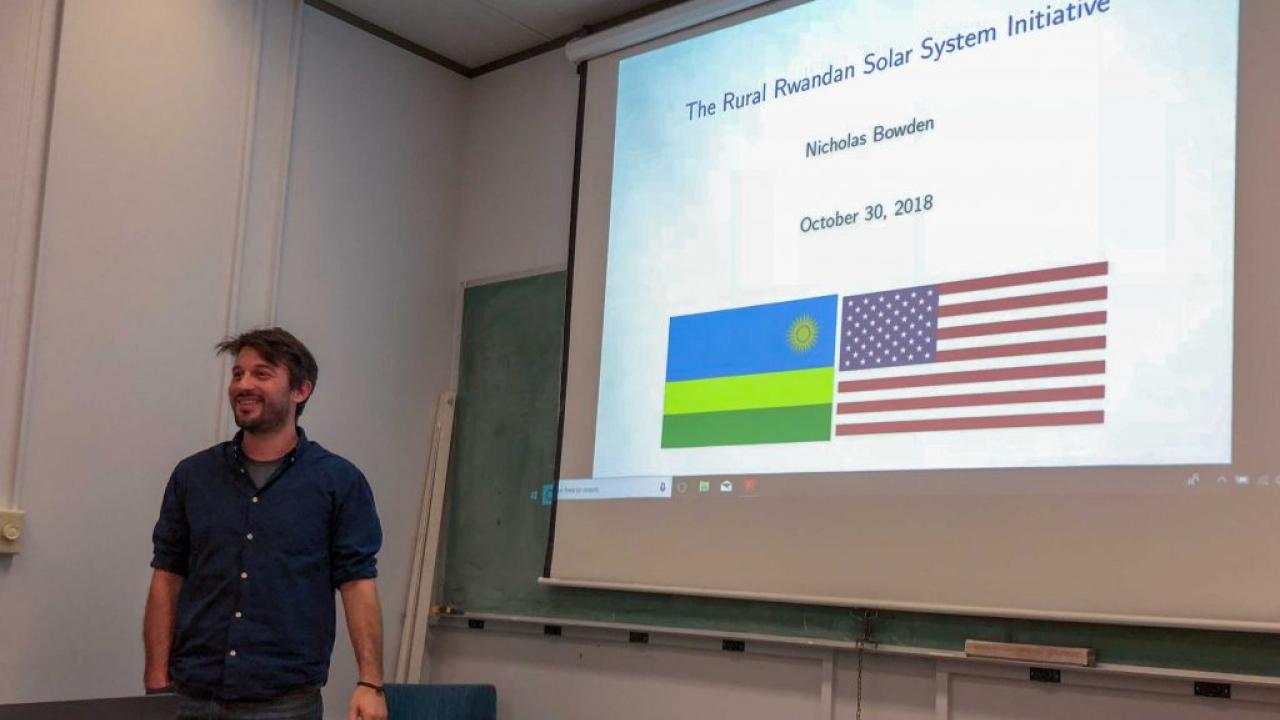 At the latest Biological and Agricultural Engineering department Fall Quarter Seminar, Nicholas Bowden, a UC Davis Ph.D candidate currently working in the Energy and Graduate Group, presented his recent work on the Rural Rwanda Solar System Initiative. In a room filled to capacity, Nicholas stated that the initiative's goal is to help bring electricity to rural Rwandans who live without access to electricity. Approximately 60% of the population live without reliable access to electricity.

As a result of a Poverty Alleviation through Sustainable Solutions (PASS) grant from the Blum Center for Developing Economies, written by Nicholas, the Mandela Washington Fellowship Reciprocal Exchange program for Young African Leaders Initiative (YALI), and Dr. Bryan M. Jenkins' "Engineering in Environmental and Biological Systems" course, the Rural Rwandan Solar System Initiative began to take shape. Nicholas partnered with Janvier Kabananiye, a senior engineer for the Rwanda Energy Group and one of the Mandela Washington Fellows who came to UC Davis in 2017-2018.

Through a partnership with UC Davis Global Affairs and the Mandela Washington Fellowship, about 25 people from countries all over Africa come to UC Davis during the summer to study, learn, and work. The Mandela Washington Fellowship sends around 700 students to universities throughout the US and helps facilitate people from the US going to African nations.

This September, Nicholas was welcomed by Janvier to Rwanda where Nicholas was able to gain first-hand knowledge of the situation. He gathered all kinds of data about the day-to-day practices of Rwandans which gave him invaluable insight into making renewable energy possible in the future.

During his visit to Rwanda, the initiative added a third partner, Great Lakes Power Ltd. According to the United States African Development Foundation, Great Lakes Power Ltd. is a female-owned enterprise that "sells solar powered phone charging and lighting products to customers at the base of the pyramid in the Western and Eastern provinces."

"Lighting is the first thing people use electricity for. To actually have light is an amazing thing," said Nicholas. Most people in Rwanda are either using flashlights or kerosene lamps to navigate their homes and towns.

Rwanda is near central Africa, about the size of Massachusetts and made up of five provinces. Because most of the inhabitants are evenly distributed throughout the country, bringing electricity to them is not as easy as bringing it to central locations. The transmission network is spread thin, which makes options like solar energy much more attractive.

"The government realizes there is a problem," Nicholas said, "and wants to help solve it."

Nicholas met with several government agencies and learned how the priorities of these agencies often differ from what people in the West might expect. After searching through the meteorological societies website, he was able to pull together data that gave a better picture of the potential for solar energy efficiency across Rwanda.

Nicholas is not discouraged by the challenges of the infrastructure. There are plenty of people in Rwanda, people like Janvier Kabananiye and the people from Great Lakes Power Ltd, that really want to help rural Rwandans gain access to reliable energy.

Nicholas is hopeful. "The country was teaming with activity.  People walking to work in the fields, people working in the fields, people fetching water and firewood, bike taxis, motorcycle taxis, people on every street at every shop in Kigali and the cities on the few national highways, children walking to school and doing the work above too.  People selling fruit vegetables, slaughtering animals, working with metal, and on and on," he said. It may not be overnight, but the potential for renewable energy's success in Rwanda is definite possible.